Why to make it up as you go along

The difference between ‘fluid decision-making’ and ‘making it up as you go along’ can be hard to detect. I’ve just returned home after a nine-day ski-tour in the Ecrins, a spectacular block of mountains in the southern French Alps. It was an Eagle Ski Club tour and there was a day-by-day plan. Not only did we not do a single thing on that plan, we altered the plan and then re-altered it on a daily basis for six consecutive days. Is that a sign of success or of failure?

It was an interesting exercise in peer-driven decision-making. Our group had an official ‘leader’, Alain, who had organised the trip. But in terms of expertise, no one person was obviously the expert. Alain had skied at La Grave (the local off-piste ski resort) and had done the planning, so had the most local knowledge. Two of our party of six spoke French and so had best access to local weather reports and information from other skiers and hut guardians. I had the most high mountain experience, thanks to my various Himalayan climbs. Tom was the best skier, being a BASI3 ski instructor. All of us had done independent (without a guide) ski-touring. None of us had toured in the Ecrins. And on top of all that, given that our goal was to keep the group together, and to travel safely, it had to be the most conservative voice that dominated in any group decision, not the most expert.

The Ecrins are a complicated mountain landscape – relatively flat valley floors lead into a world of steep-sided valleys and sweeping walls of crenellated rock with narrow passes of snow giving access from one valley to another. There is little in the way of safe, gentle terrain. In addition, we were in the middle of a weather system of howling wind, over 60 km/h and gusting over 80. Such strong winds make it difficult for a skier to stand when high on a mountain or crossing a col, if you are knocked off your feet, sliding for hundreds of meters down icy snow slopes or over rock-bands is a distinct possibility. 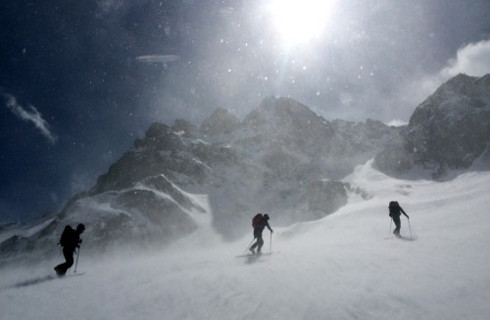 High winds batter our ski group as we climb.

Even more deadly is the unseen consequence of wind – it is damaging the snow. The crystalline snowflakes are battered down into more uniform shapes that fuse together in slabs, slabs that are impossible to detect in the general snow-scape but that can be broken loose by the weight of a single skier. And when a slab tears away from the snow around it, it starts an avalanche.

The risk of this is not an exaggeration. Three days into the tour, our latest new plan (having already changed the plan due to poor visibility) involved crossing the Col Émile Pic to reach the Refuge des Écrins. With the wind continuing to howl, we were wary of dealing with the abseil required to drop down from the 3483 metre col and we decided to continue up the Plate de Agneaux glacier valley to the Refuge Adele Planchard instead. We passed three other ski parties that chose to cross the Col Émile Pic – which of course left us wondering if we’d were just being overly cautious.

Two of those other parties descended safely to their mountain hut. The third one inadvertently triggered a windslab just below the abseil. Of the group of 12, eight were caught in the subsequent avalanche, three died and one was airlifted to hospital, gravely injured. The fact that they had two professional guides leading their group did not save them.

We heard the news that evening as it was passed by radio from one mountain hut to another. We already had another piece of sobering information. We had taken advantage of this one day of clear skies to climb our only summit of the week, La Grande Ruine, 3765m. We had battled through the high winds, and had made our own mistakes, with three skis – left below the summit when we continued on foot with iceaxes and crampons – being blown away. We eventually found all three thanks to good luck and the help of another ski group. 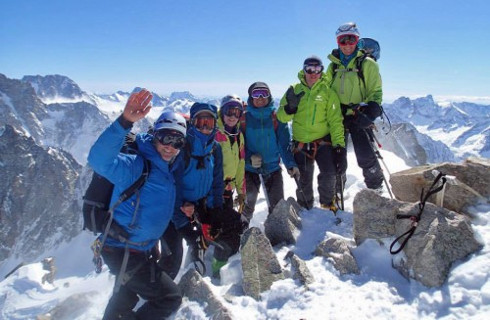 Our group on the summit of La Grand Ruine.

We and two other groups skied down the hut and were safety seated in the dining room, drinking tea and waiting for dinner to be served, when a lone skier came down the slope we had all crossed a few hours earlier. He took a steeper line than we had and triggered a windslab. The subsequent avalanche took out a slope we had all skied across. He got himself out of the debris but lost a ski in the process. We promptly changed our plans yet again, pulled out of the main range altogether, and then slowly worked our way back in over the next few days as conditions improved. 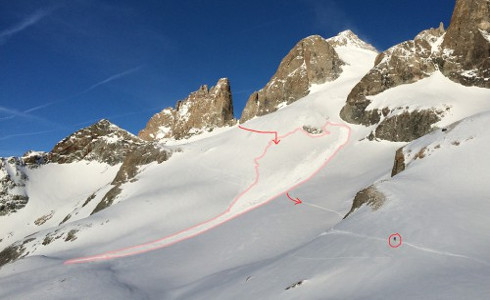 The avalanche track is outline. On the right a skiers is circled for scale. The arrows show our line of entry and exit – done before another skier triggered this same slope. The summit of La Grand Ruine is the snow triangle in the background.

One of the challenges of ski-touring with relation to avalanche danger is the lack of immediate feedback. In many ways mountains provide powerful real-time feedback. If you are caught by high winds, the feeling that you might be lifted off your feet is a visceral reminder that being in this place in these conditions is a stupid idea. But avalanche feedback is very one-sided. Once it has happened it is visually obvious and if you are caught, the consequences are immediate and profoundly serious, anything from lost skis, to grave trauma injuries, to death.

But every time we ski over a windslab that we can’t see, and we don’t trigger it – by chance we don’t pass over the hidden point of maximum weakness, where our own body weight can set off the hidden ‘land-mine’ that will cause the slope to collapse – we have no idea whether our safe passage was due to skilful choices or blind good luck. Being human, we tend to believe in our good judgement until another skier behind us triggers the slope and proves us wrong.

Mountains are a low expertise environment, in the sense that the cues and patterns we attempt to detect don’t automatically lead to reliable outcomes, both weather and snow conditions being frustratingly difficult to judge with repeatable accuracy. That makes it easy to mistake luck for subjective skill. We need to be constantly cautious, focusing on the consequences of failure in the decision making, always aware that our apparent skilful reading of the environment may in fact be no more than a run of luck.

Onlookers tend to assume that mountain climbing – whether on foot or on ski – is all about the ‘conquering’ of summits. And we did have the highest peak in the Ecrins on our plan, or at least the winter ski peak, the Dôme de Neige des Écrins, which tantalisingly just crosses the magic 4000 meter mark. It is a magnificent peak, visible from many kilometres away, and providing a exhilarating ski descent. But we abandoned it as an objective without a second thought. It was not in fact a key focus. 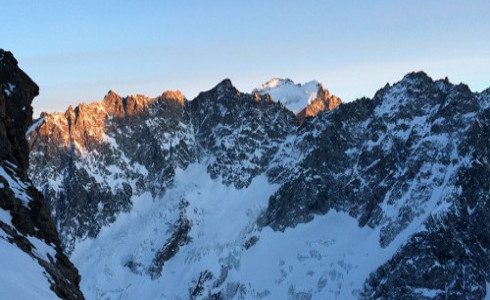 The snow dome at the back right is the Dome de Neige des Ecrins, highest peak in the range reachable on skis. Tantalising, but out of reach for us given current conditions.

I think what allowed us to come away from the tour feeling that the whole thing was a great success, despite the constant plan changing, was having a shared agreement about what our real objectives were. They were not the Dôme de Neige des Écrins, or the initial plan for the tour. What we actually wanted was:

We achieved all three, everyone left the tour excited about what we had done, keen to return to the Ecrins and happy to ski together in the future. It was an unqualified success and while our constant shifts of plan were a source of amusement, we were proud of how we’d dealt with the difficult conditions. 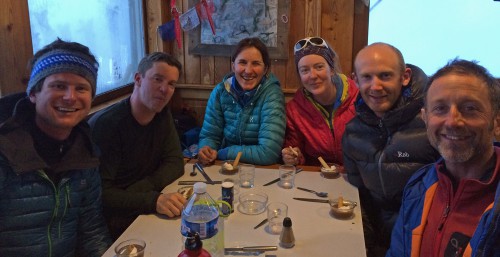 A happy team of skiers having dinner on our final hut night.

Working in a high risk, high uncertainty environment requires maintaining a broad frame of reference. To fixate on the initial schedule or a specific peak leads to biased decision-making, entering a sub-conscious process of explaining away potential threats in order to allow the plan to unfold unhindered.

We have to constantly ask “what could go wrong in this scenario” as a way to test the relationship between the current plan and the overall priorities. On a daily – even hourly – basis, we need to pay attention to cues and patterns in our environment, and relate them back to our priorities. We can’t change our environment – other than by moving within it. We want to stay true to our priorities. So the thing that changes is what lies between them – our plan of execution.

We were not simply making it up as we went along. We stayed true to our three key objectives, by letting the plan and the specific summits slide away as conditions changed. Fluid decision-making, informed by the latest information, let us achieve what really mattered to us.