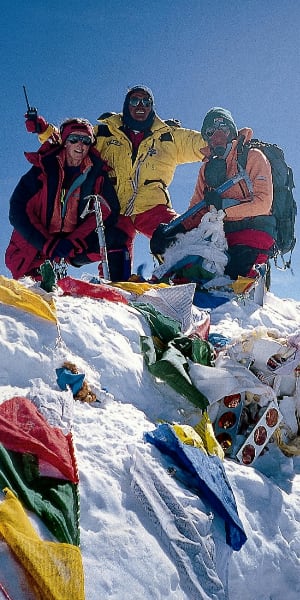 Cathy O’Dowd (left) on the summit of Everest with Pemba Sherpa and Ian Woodall.

Cathy O’Dowd and Ian Woodall flew out from Johannesburg on 17 April. The rest of April was spent in mountain training in Nepal, and in expedition preparation in Kathmandu. There Cathy and lan linked up with the rest of their team summit climbers Jangbu Sherpa and Pemba Tenging Sherpa, ABC cook and support climber Phuri Sherpa, Advanced Base Camp (ABC) manager Mangal Tamil and Base Camp manager Padam Maygar.

On 30 April the team left Kathmandu for the drive into Tibet. They arrived at Base Camp, 5 200 metres, the following night. The North Face of Everest lay 20 kilometres to the south of their camp. On 2 May lamas came up from the nearby Rongbuk Monastery to conduct the puja, a Buddhist ceremony in which the team asked for safe passage on Chomolungma, ‘mother goddess of the earth’, as the Tibetans call Everest.

On 4 May, the Sherpas left Base Camp to establish ABC, with all the mountain equipment loaded onto the back of yaks. While the Sherpas set up ABC and then moved up to establish Camp 1, Cathy and lan concentrated on acclimatization lower down. They returned to Base Camp on 8 May to meet the group of 19 South Africans (and two Americans) who had come to visit the team. Cathy took some of the group trekking up the East Rongbuk Glacier, to 6 000 metres, while Ian entertained the others at Base Camp. The last of the group left on 15 May.

On 10 May Pemba and Jangbu were involved in a rescue of a frostbitten Ukranian climber. Three Ukrainians had summitted on 8 May, the first summit of the season from the North. Caught in unexpected bad weather on the descent, one died and one was severely injured. A team made up of Sherpas from other expeditions present, brought the victim down to ABC in an epic night rescue. Cathy and lan arrived at ABC on 18 May. The following day there were two more casualties, both while descending from the summit. One disappeared, one was seen to fall off the summit ridge.

The next four days were spent in acclimatization with the Sherpas moving the Iast of the equipment loads to the top camp. On 25 May, Cathy and Ian moved from ABC to Camp 1, 7 000 metres. They spent the next day there, acclimatizing. On 27 May, they moved to Camp 2, 7 500 metres, while Pemba and Jangbu climbed to Camp 1. On 28 May, all four climbers moved up to Camp 3, 8 300 metres. Camp 3 is the highest regularly used camp in the world, higher than the summits of all but five of the world’s mountains. 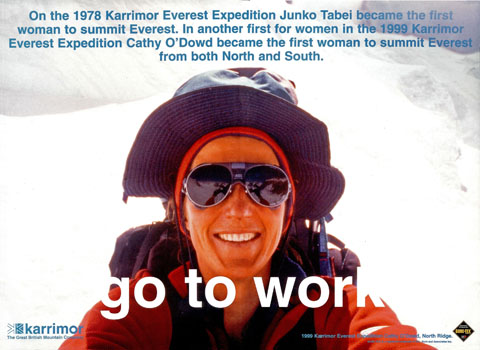 Cathy, Ian, Pemba and Jangbu left Camp 3 at 00h30 on 29 May. All four were using supplementary oxygen. The night was extremely warm for Everest, averaging about – 17C. The team climbed steadily through the night and the early morning. It was a season with unusually little snowfall, so much of the climbing was on broken rock. The team found the summit ridge unexpectedly difficult, but feasible.

Jangbu and Cathy reached the summit at 08h00, Pemba and lan some ten minutes later. The summit was chilly, due to wind, but otherwise the weather was perfect. The team took both photographs and videos on the summit. Cathy was the last to leave, spending 45 minutes on top.

The team was back at Camp 3 by 13h00. They stripped the camp and headed on down. They had been the only team to summit on 29 May, and the last team to try for the summit. At 14h00 the weather changed, with snowfall, high winds and low temperatures. The climbing season for Spring 1999 was over. Cathy and Ian battled on down to Camp 2 and the following day the whole team was back at ABC.

By 1 June the whole team and their equipment, was back at Base Camp, and by 4 June they were back in Kathmandu. On 10 June Ian and Cathy returned to South Africa.

Cathy O’Dowd had become the first woman in the world to climb Everest from both its South and North sides. lan Woodall had got his second ascent of Everest, Pemba his third and Jangbu his fourth. The expedition overall was without incident, and great fun was had by all concerned.

Jangbu on the summit of Everest.