In June 1991 I joined the Mountain Club of South Africa’s Centenary Expedition to the Corderilla Real in Bolivia. There I climbed with Stephen Kelsey and Graham Wittaker, both of whom had come out from the UK. We were joined on some of our climbs by Phil Lloyd. 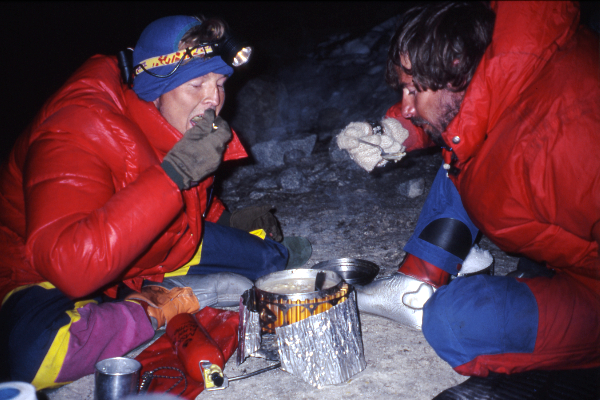 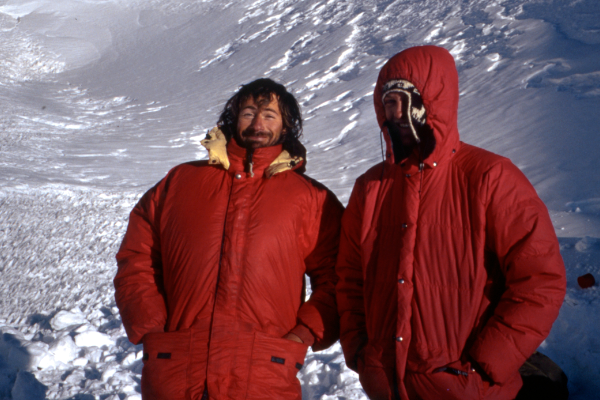 Waiting for the Sun

I hate flying. Especially along crammed next to some other poor sod I can’t communicate with. My body says it has just gone 4am, outside it is probably noon. Breakfast finished I stare out of the window at cloud islands over the North Atlantic.

I have tapes. You probably have too. Full of memories as vivid as the lyrics they carry. Some are old, dear memories. So ingrained any refrain can conjure up old friends instantly. Brothers in Arms, Tim and Big Corner. Others are more transient and will soon be replaced.

I rifle through the tape bag. Memories flood in with the names. I choose on at random and settle like some cinema goer.

The song of standing cold and tired and waiting. Waiting for warmth.
The sun a hint of red on the horizon. It’s not yet 6am but I’m totally spent.

Leaving the bivi at 4 hadn’t been a problem. Subdued excitement meant my dreams had been of steep climbs and showering ice smiling in the sun, happy refreshing dreams. Waking to go had been easy, the moraine simply an inconvenience, as we had stumbled up towards the stars. The song had been humorous then.

The mixed grond was barely held together by the thin ice. We move separately, me not wanting to shout a warning to Graham and stop him, afraid of being left alone in this sinister dark landscape. At last the glacier, a thin hard crust so we lurched and prostrated ourselves like pilgrims to the mountain.

Now the song again as I stand waiting for the purple and red to diffuse and lighten. I’m waiting for the sun. I want it steadying hand on my back as I tip-toe up the side of this giant.

‘…Scatterlings of Africa
Each and every one.
In their hearts a burning hunger
Beneath the copper sun…’
Juluka

The afro beat in time with my breathing, so out of place on this dusty moraine. It is happy music and I can feel my heart surge against my ribs, not just from exertion. The excitement bubbling from my stomach mixes with the joy in the music. Over there on my right is Gorra de Helio. The ridge doesn’t look too steep from here. Beyond is Pico del Norte, the pillar looks steeper than I expected.

I have dreamed of coming here and doing these routes. Then though, the walk wasn’t as hard and the images not as full. The size now is diminished by its own sheer mass. The confidence inside me builds with the music. Soon I’ll stand on top of these peaks. I’ll see other mountains in the distance and I’ll get to know their sides as well. For now hope and happiness flow in through ears and eyes.

Sometimes there is sadness also. Jarring down from Illampu towards the river, Meatloaf blasting into my head, I know there is a long uphill to base camp. I’m resigned to our defeat now but it’s still a very bitter pill.

In my mind I run through the collective troubles that culminated in our retreat, spread out at short intervals, not far enough apart to lull you, but just so you are nearly recovered. The schrund, my axes plop through deeper powder on the far side. I know I’ve been there instants before I actually start to fall. My weight just moving backwards from an ineffectual push, the horror as it sucks at my tools, threatening to hold me upright long enough for the schrund to open beneath me. I stare into the holes I left feeling slightly sick. Then in the strengthening sun I turn away to follow the others.

Later, still behind, I pause. Snow kicked down from above makes seeing impossible. Anger and panic as I look up, if I look down I can see the ice start to collapse. I have got to go on.

Finally, clinging to crumbling rock, spread out to minimise the chances of hitting each other with debris, shouting to beat the locomotive sound of the wind, body language telling of the cold, fear and exhaustion in all of us. It’s a formality for our voices to decide to go down.

Definitely not paradise by the dashboard-light but dissected by it as the river gets closer.

The uphills were the loneliest part. They required us to move at our own pace, moving in our own worlds. We were soon cut off from each other. Scratching for every last bit of air made talking impossible.

Long letters composed to absent friends told them what was happening to me and my emotions. My pen never actually met paper, all of them written and discarded in my head.

There was always the widening view and the temptation to stop and admire it, leading to long breaks. I sit, volume turned down and lean against my pack. Mostly I pick out prospective or previous routes. I don’t want to think about where I am now, the music will take care of that once I’m moving again. But tomorrow?

There is also a bit of explorer that drives me to the top of hills, to see into the next valley. Often this made the last few metres to the crest a test of stamina and will as I strode well past where I would normally stop and rest. You need happy music to drown the pain on hills. We had a surplus of them.

The irony of it. Lying there in my own cocoon of warmth, outside the frost of my breath coats the bivi bag. Through the gap in the zip I watch for shooting stars. Bored and wishing for sleep I let my mind wander. I don’t want to toss and turn. I can feel the warmth from Cathy as she is squashed next to me. Beyond I can hear that Graham is not asleep yet. From inside my bivi bag talking is impractical. The walkman competes with my thoughts for tomorrow. I’ve done this mountain before but slower and not as confidently.

Waking up, I try to undo the bivi bag without disturbing the frost on the inside, the fabric like cardboard where it’s frozen. The other two stay encased until the snow has started to melt over the stove,the morning ritual of scratching snow into the pan and starting the stove all completed alone under the purple sky.

The magic of music. Sometimes I need to catch my breath at the vividness. Now Europe is creeping closer and out of the window the clouds totally obscure the sea. My next trip already forming in my mind, I try to put aside the dread of living in London through another winter. Maybe I should go somewhere hot.